Jerusalem and the Holy Land: sacred to 3 religions 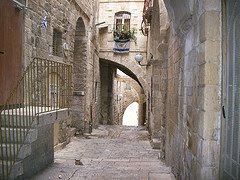 The holiness of this land was the ideological driving force behind the Crusaders' re-conquest from the Muslim rulers who controlled it since the Islamic conquests. Numerous pilgrims visited that land throughout history.

Although the Zionism movement, the current State of Israel and the Israeli-Arab conflict are largely political, the dispute around the control of the Temple Mount in East Jerusalem is based on religious beliefs. Some have proposed the founding of a Federal Republic of the Holy Land as a one-state solution to the Israeli-Palestinian conflict.[1]

Israelite kingdoms and states existed intermittently in the region for over a millennium, with Jerusalem as their capital. Following foreign conquests, Israelite presence in the Holy Land dwindled. In particular, the failure of the Bar Kokhba Revolt against the Roman Empire resulted in widescale expulsion of Jerusalemites. The Romans renamed this land Syria Palaestina, the origin of the name Palestine. Jerusalem was renamed Aelia Capitolina. The Mishnah and Jerusalem Talmud, two of Judaism's most important religious texts, were composed in the region during this period.

Jerusalem appears 669 times in the Hebrew Bible. Zion, which usually means Jerusalem, sometimes the Land of Israel, appears 154 times. In the first sections, the area of Jerusalem is called Mount Moriah, the location of the binding of Isaac, now called the Temple Mount.

In the Hebrew Bible, Jerusalem and the Holy Land are considered a divine gift, part of several covenants. Jerusalem has long been embedded into Jewish religious consciousness. Jews have studied and personalized the struggle by King David to capture Jerusalem and his desire to build the Jewish temple there, as described in the Book of Samuel and the Book of Psalms. Many of King David's yearnings about Jerusalem have been adapted into popular prayers and songs. Jerusalem is mentioned in many Jewish prayers; the Passover seder prayer ends with Next year in Jerusalem. Jews turn towards Jerusalem to pray. The Western Wall of the Temple Mount, nicknamed the "wailing wall", is the holiest site to Jews and a site of pilgrimage for centuries.

The Holy Land is significant in Christianity, mainly because it is the place of birth, ministry, Crucifixion and Resurrection of Jesus of Nazareth, the Saviour or Messiah to Christianity.

Holy cities for Christians of all denominations:

Sharing similar religious beliefs with Jews and Christians, Muslims consider the land west of (but not limited to) the Jordan River to be sacred, as mentioned in the Qur'an.

The first few months of Islamic history saw the Al-Aqsa Mosque in Jerusalem to be the first Qibla (direction of prayer), as opposed to the Kaaba in Makkah. Both Jerusalem and the Al-Aqsa Mosque, are considered to be the third holiest places for all denominations of Islam. In Arabic, the city of Jerusalem is commonly known as "al-Quds", meaning "the Holy".

Muslims also consider the depression below Mount Sinai, known as "Tuwa", to be sacred as mentioned in the Qur'an as the "Holy Valley" (الوادي المقدس):