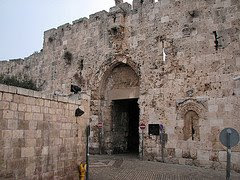 (audio) (help·info), al-Quds)[ii] is the capital[iii] of Israel and its largest city[2] in both population and area,[3] with a population of 747,600 residents over an area of 125.1 square kilometres (48.3 sq mi) if disputed East Jerusalem is included.[1][4][iv] Located in the Judean Mountains, between the Mediterranean Sea and the northern tip of the Dead Sea, modern Jerusalem has grown up outside the Old City, says Wikipedia.

The city has a history that goes back to the 4th millennium BCE, making it one of the oldest cities in the world.[5] Jerusalem has been the holiest city in Judaism and the spiritual center of the Jewish people since the 10th century BCE,[6] contains a number of significant ancient Christian sites, and is considered the third-holiest city in Islam.[7] Despite having an area of only 0.9 square kilometer (0.35 square mile),[8] the Old City is home to sites of key religious importance, among them the Temple Mount, the Western Wall, the Church of the Holy Sepulchre, the Dome of the Rock and al-Aqsa Mosque. The old walled city, a World Heritage site, has been traditionally divided into four quarters, although the names used today — the Armenian, Christian, Jewish, and Muslim Quarters — were introduced in the early 19th century.[9] The Old City was nominated for inclusion on the List of World Heritage Sites in danger by Jordan in 1982.[10] In the course of its history, Jerusalem has been destroyed twice, besieged 23 times, attacked 52 times, and captured and recaptured 44 times.[11]

Today, the status of Jerusalem remains one of the core issues in the Israeli-Palestinian conflict. Israel's annexation of East Jerusalem has been repeatedly condemned by the United Nations and related bodies,[12][13] and Arab Palestinians foresee East Jerusalem as the capital of their future state.[14][15] In the wake of United Nations Security Council Resolution 478 (passed in 1980), most foreign embassies moved out of Jerusalem, although some countries, such as the United States, still own land in the city and pledge to return their embassies once political agreements warrant the move.[16]

Posted by Robert E Trudeau at 4:35 AM